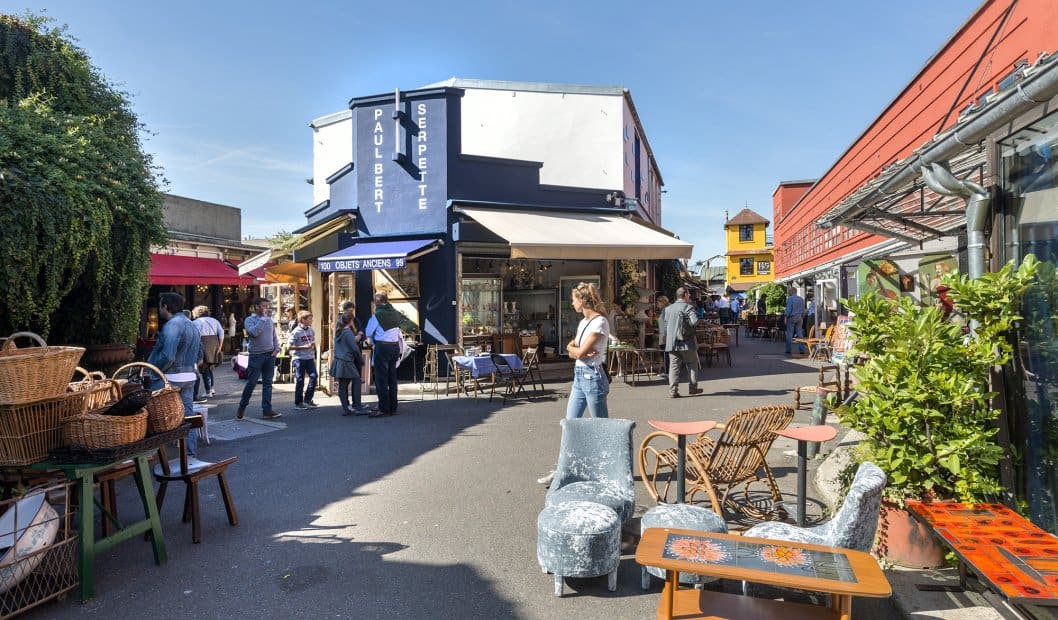 Le marché aux Puces de Paris Saint-Ouen is the largest concentration of antique dealers and second-hand dealers in the world, totaling more than 5 million visitors per year, among whom we meet many foreign tourists and very often even celebrities.

Fifth tourist site in France located at a door north of Paris opposite the 18th arrondissement, it is held every Saturday, Sunday and Monday.

It is an original experience of popular Paris, a walk full of surprises and a gold mine for lovers of vintage pieces or antiques ...

The Markets are open every weekend of the year, from Friday to Monday at the following times:

You can come to the Puces by METRO:

1. By Garibaldi Metro (line 13), cross the square alongside the church, you arrive at rue des Rosiers, turn right, the Puces are 700 meters away.
2. By Metro Porte de Clignancourt (line 4), cross Boulevard des Maréchaux towards Saint-Ouen and go under the ring road to arrive at Les Puces via rue des Rosiers.
3. By Metro Porte de Saint-Ouen (line 13), follow the ring road on the Saint-Ouen side towards the P.te de Clignancourt until "la Boule" you are at the flea market. (Prefer the Metro Garibaldi if you take line 13).
4. By Saint-Ouen Metro (line 14)

You can also come by BUS for a more pleasant journey:

1. The bus 85 brings you to the heart of the Flea market, stop « Marché aux Puces Or "Paul Bert".
2. With the bus 95, you get off at the “Porte de Montmartre” terminus, go under the ring road towards Saint-Ouen. 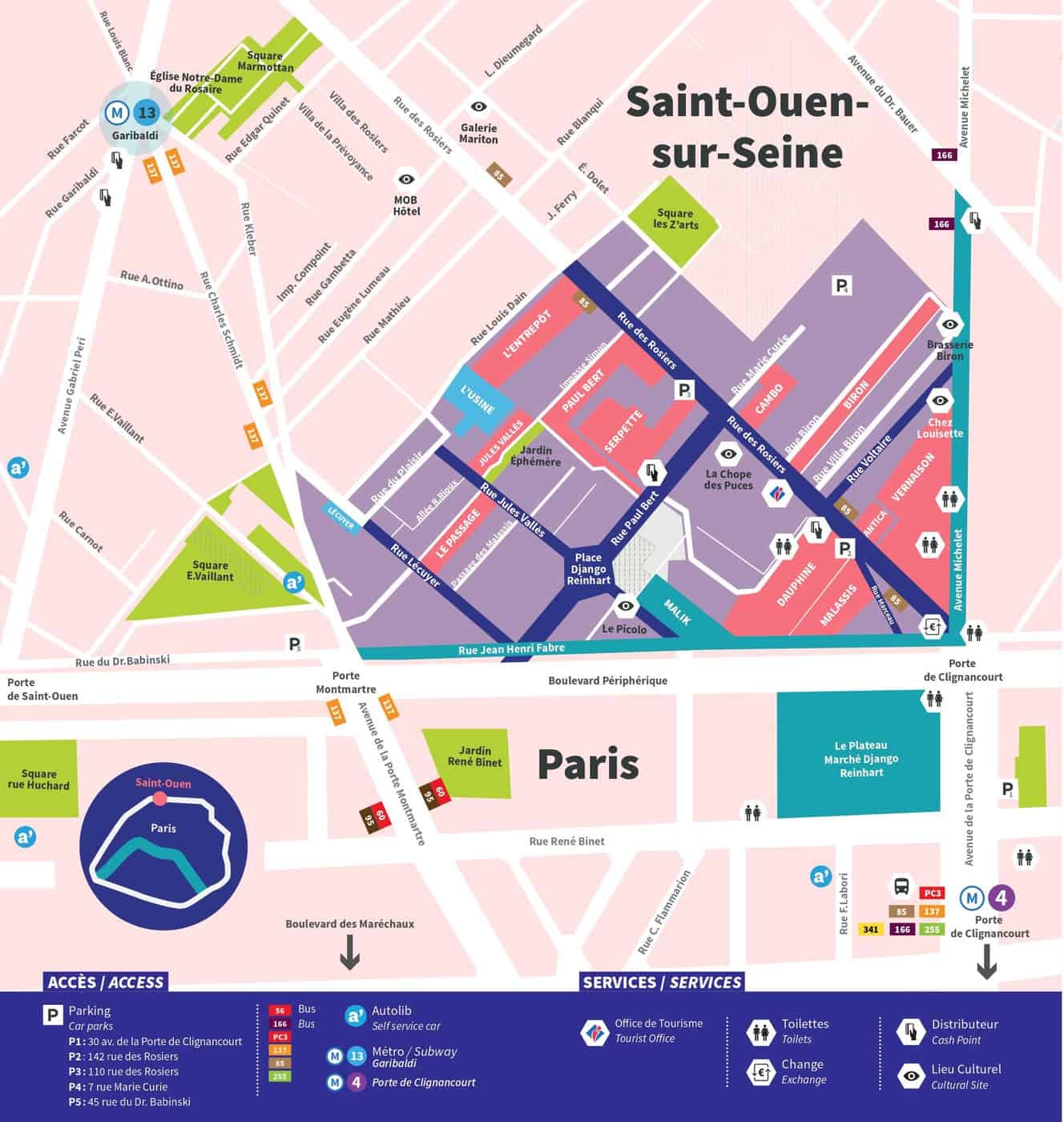 The must-see sites
of Plaine Commune

Plaine Commune has a very diverse heritage, which in 2014 earned it the Cities of Art and History label, awarded by the Ministry of Culture.
Next to world famous sites such as the cathedral basilica of Saint-Denis, tomb of the kings and queens of France, the marché aux Puces of Paris Saint-Ouen and the Stade de France, we invite you to discover other heritage treasures, such as the Paul Éluard art and history museum or the Education House of the Legion of Honor.

To find all of this information and more, you can visit the site:
> The Essentials of Plaine Commune

Brochure
"A territory to discover"

Guided tour of the Flea markets

If you want to take a guided tour of the Flea markets, or discover nearby sites,
you can consult the site:
> Plaine Commune - Guided tours 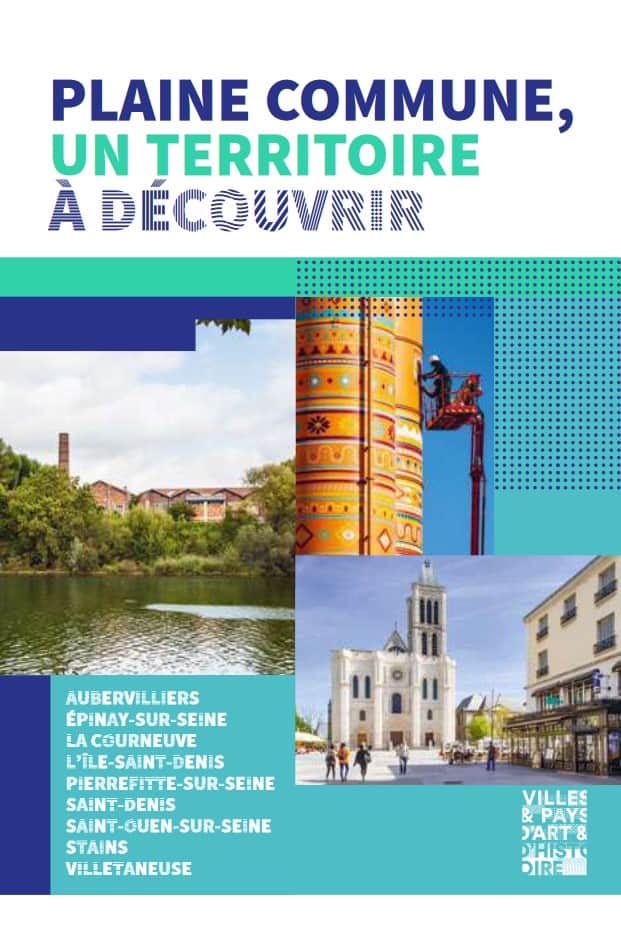 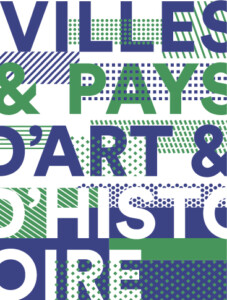 Photo of the Cathedral © Mary Quincy - Texts taken from the brochure "Plaine Commune, a territory to discover" 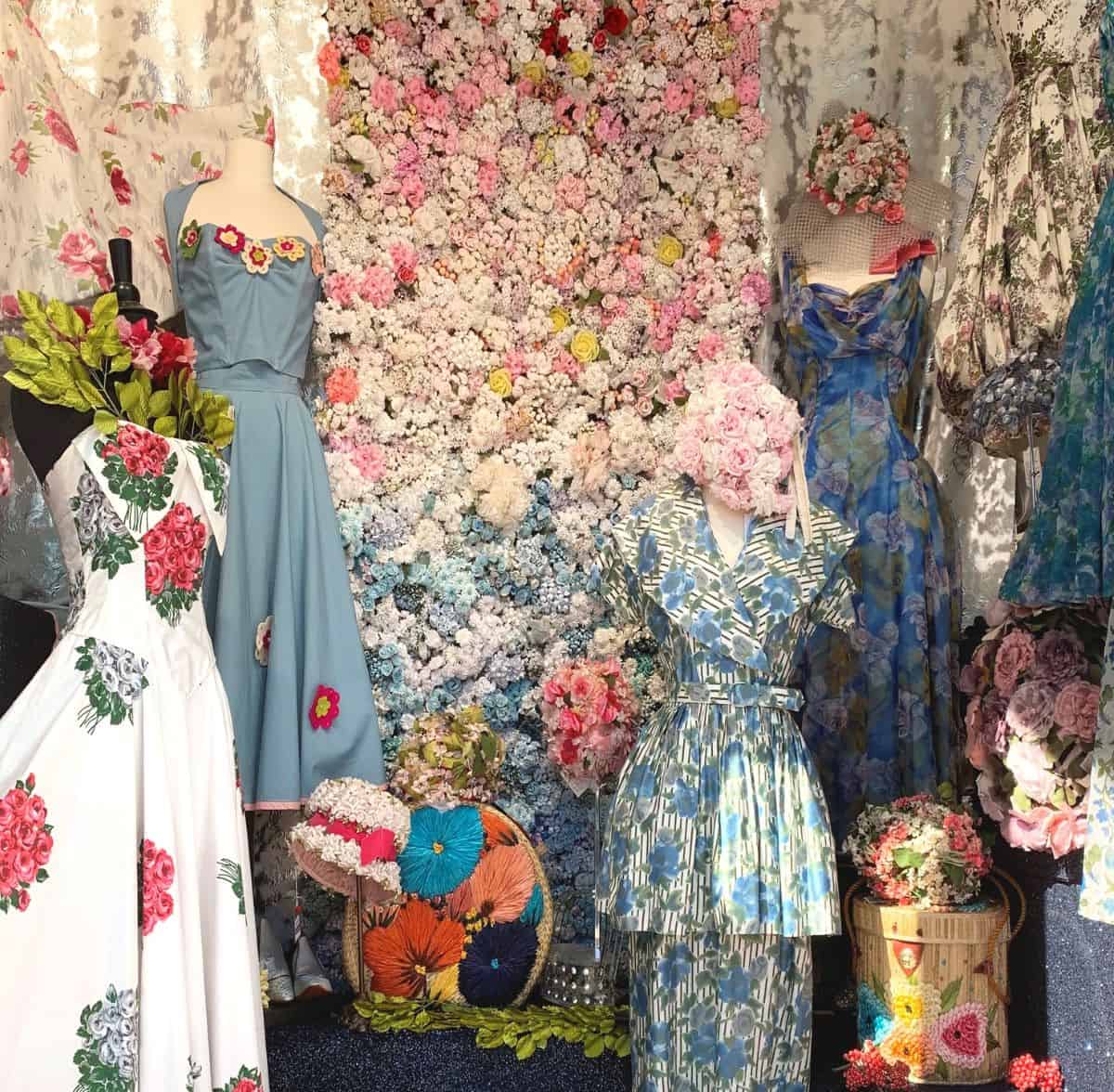 The history of the Flea market

The largest antique market in the world

The origin of Marché aux Puces de Paris - Saint-Ouen dates back to the 1870s, nearly 150 years ago, when, driven out of Paris, the waste pickers came to settle on the other side of the “fortifs”. Nevertheless, the official date of birth of the Puces is 1885. A parking permit is now required from the Puciers by the city of Saint-Ouen in order to be able to exercise their activity. Coming from biffins and second-hand dealers, some will become second-hand dealers or other antique dealers. 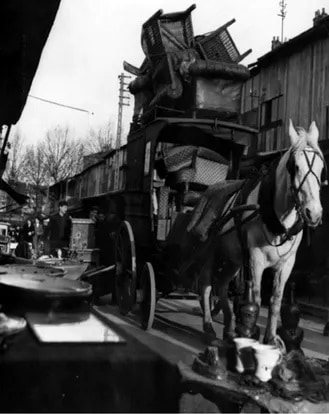 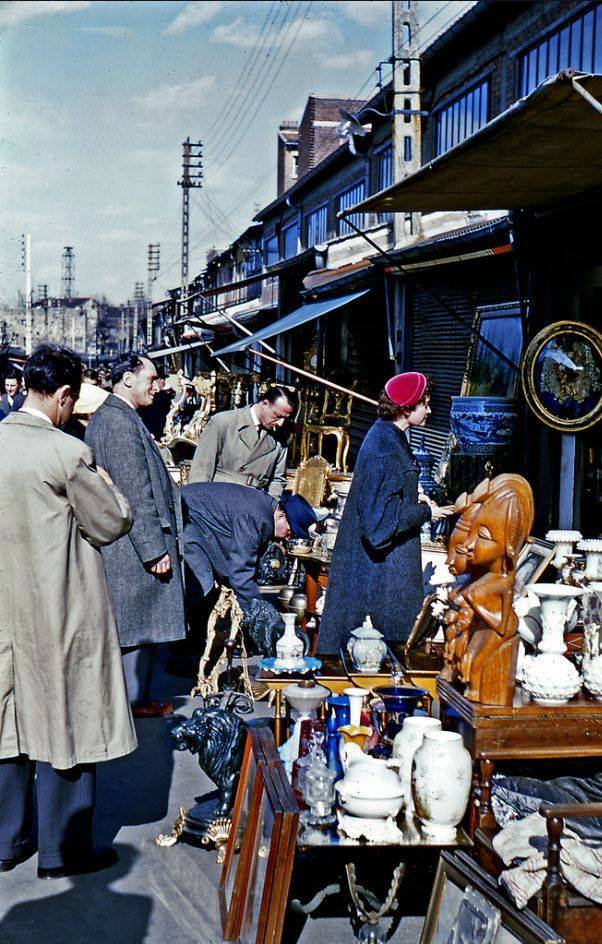 Driven away from the center of Paris, the rag pickers will then find refuge in Clignancourt straddling Saint-Ouen and Paris, served by the railroad of the small belt and by two lines of the new metropolitan. Their “Peu” market will be set up between taverns, refreshment stalls, circuses, and other fairground stalls. In 1898, a regulation specified that a second-hand dealer was:

"Reseller of old furniture, clothes, books, jewelry, dishes and other objects and merchandise of chance".

Very quickly, this small village will be surveyed by the Parisians of the beautiful districts and the socialites of the Belle Époque who flocked every Sunday morning to haggle for an incredible odds and ends from which already arose treasures. While our ragpickers formed their first union, the press of the time echoed this parallel life "This picturesque courtyard of miracles, this jungle where Apaches and bourgeois snobs mingle". Look no further for the true origins of Marché aux Puces, an expression that remained anonymous and appeared around 1904. In 1910, the fame of the Puces was definitively launched by the satirical review “L'Assiette aueurre” which devoted an entire issue to them illustrated by the figure of Poulbot. The legend could begin ...

In fact, the metropolitan will arrive in the first years of the 20th century, helping to make the Puces a place of Sunday stroll very popular with Parisians. Little by little, tired of repacking their goods after the market days, the second-hand dealers will organize themselves and settle in new "hard markets". When the fortifications were demolished in 1920, the Puces, which gained a capital letter in passing, moved to reorganize in Saint-Ouen. Entrenched although precarious, the Fleas remain in balance thanks to their success. The English week which imposes the idea of ​​the weekend has doubled the attendance, allowing the opening on Saturday and Sunday. 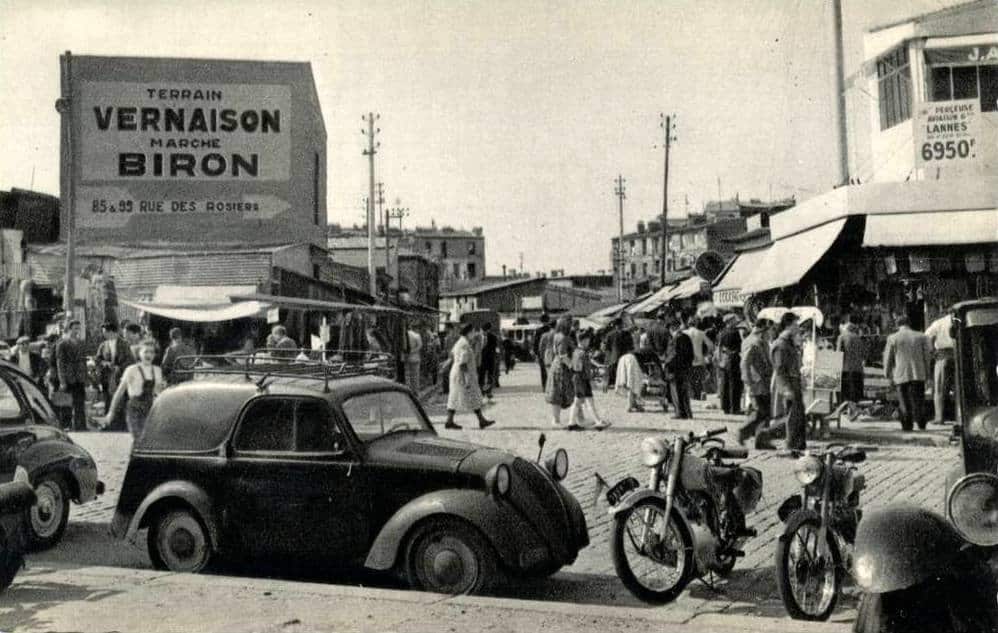 The first closed markets then appeared, the pioneer opened in 1920: former parking concessionaire at Les Halles de Paris, rental of chairs for public gardens, Romain Vernaison, who owned 12 m000 of land in Saint-Ouen where imagined seats were stored. '' build prefabricated cabins there to rent to 2 second-hand dealers.

Biron followed, inaugurated in 1925 by the Union des Brocanteurs de Saint-Denis, expelled from the Clignancourt area: nicknamed the “Belles Puces” before earning its nickname “Faubourg Saint-Honoré des Puces”. Biron was the first flea market in Saint-Ouen and also the first flea market to sell restored old objects. More chic then, frequented by the whole of Paris of Fashion and the Arts, Biron will launch Primitive African Art. That same year 1925, by municipal decision, the Puces operate from Saturday to Monday. The merchants' association has 120 members when the Puces gather 300 free Puciers around the Market.

In 1938, Amedeo Cesana, a Venetian merchant, in turn opened the Jules Vallès Market. Upon liberation, the Flea markets remained “this gray area on the edge of the City of Light”. A pile of barracks where nothing is insured against theft and fire. In 1942, on land reserved for the cultivation of fruits and vegetables, granted for life by Mr. Bourdin to Mr. Malik, he will continue horticulture and subsequently, will create the Market which will bear his name in order to sell secondhand clothes and old clothes, while adding streetwear and sneakers, merchandise that today has taken over the old. In 1946, the Rosiers market, then a stronghold of resourcefulness, arose in a former garage. 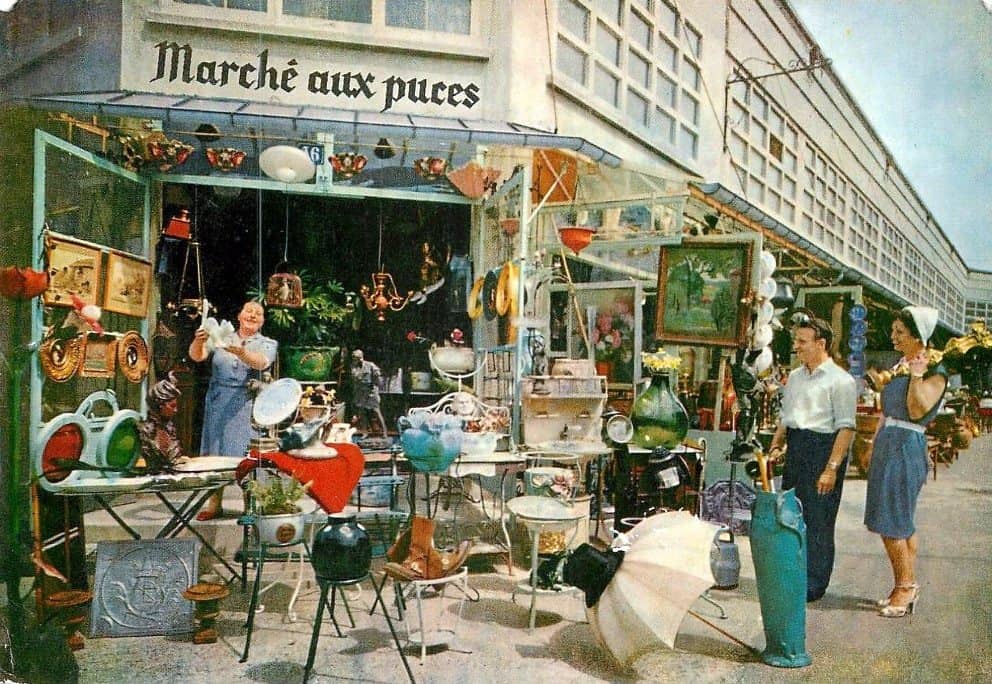 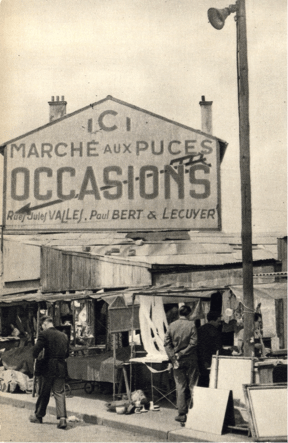 Then Paul Bert innovates with his 200 stands of 12m2 and will be permanently rebuilt in 1954. In addition, the weekly sidewalk unpacking on Friday, Saturday, Sunday and Monday is being organized and growing in importance, which accentuates the popular side. flea market and creates the link between markets.

At the turn of the 60s and 70s, the Flea markets supported 2800 people, including 400 artisans living in Saint-Ouen or in the surrounding area, excluding merchants. The opening of the new markets, Cambo, Marché des Rosiers, Hall de la Brocante and Allée Verte, will increase the surface area to 7 hectares. In 1977, Alain Serpette, son of Pucier, in turn opened a new Market: Serpette, Covered Market.

From 1985 to 1995, the regrouping of the Puces towards Porte de Clignancourt brought about the disappearance of a few markets - the Hall de la Brocante located on rue Lécuyer, the Allée Verte, Rue Jules Vallès and “les remises” on rue Lécuyer. Two new markets opened in compensation: "Malassis" reserved for Antiquarians and with an underground car park, was opened in 1989. And two years later, in 1991, the Dauphine Market hosted 150 stands on two floors. in a Baltard-style structure. 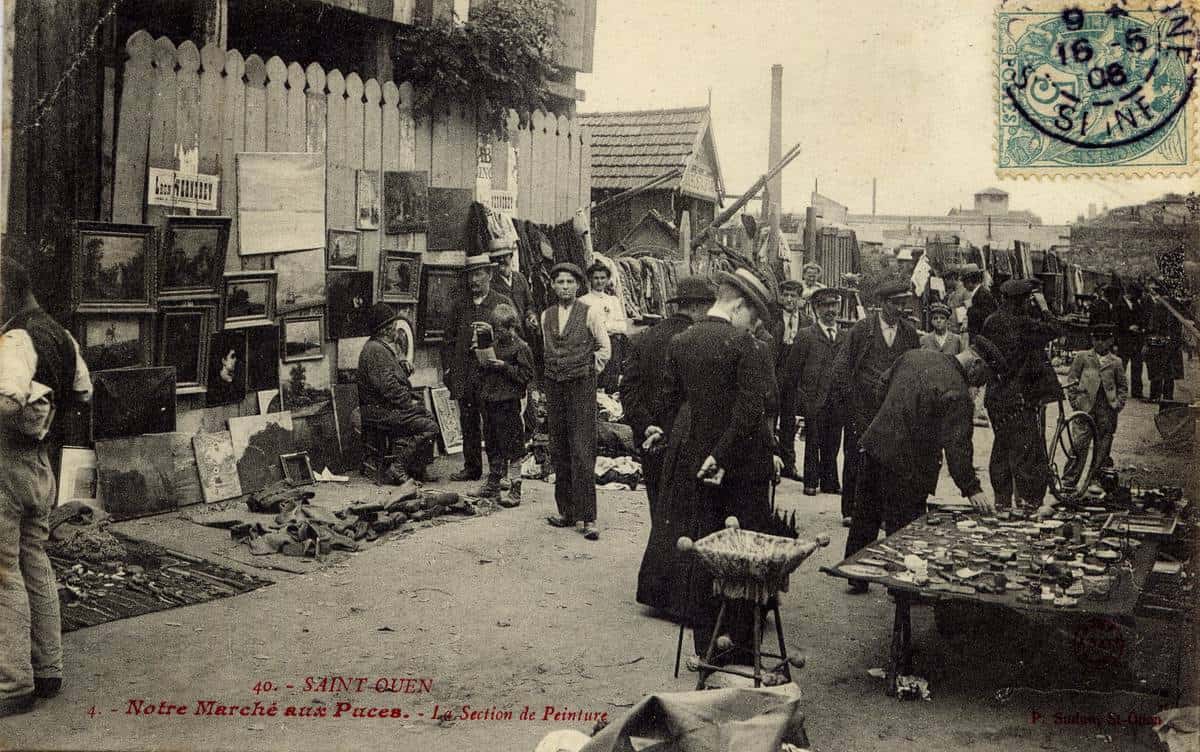 In 2001, the Association "Défense et Promotion des Puces" created in 1995 succeeded in having the fleas classified as ZPPAUP: the Marché aux Puces Saint-Ouen becomes one of the first sites in France to be classified as an Architectural, Urban and Landscape Heritage Protection Zone for its ambiance and atmosphere. This classification aims to protect the identity of each of the markets constituting the Chips, it is also responsible for protecting the Pucière activity in its entirety and its specificities.

Flea markets are the largest concentration of Art dealers in the world (1100 antique dealers, second-hand dealers and art galleries), which earned them the nickname “Grenier du Monde”, and one of the major tourist spots. from France, which plays an important role in the renown of Saint-Ouen, Paris, and the Country. With more than 5 million visitors per year, and an attendance peaking at 150 people on certain weekends, it is the fourth or fifth French tourist destination (after Euro-Disney, Notre Dame, Le Louvre, the Eiffel Tower) , on a territory of 000 hectares. It is a Mecca of Culture and History, certainly ephemeral because it is always renewed, but also of transmission of know-how and knowledge, including in the field of crafts. 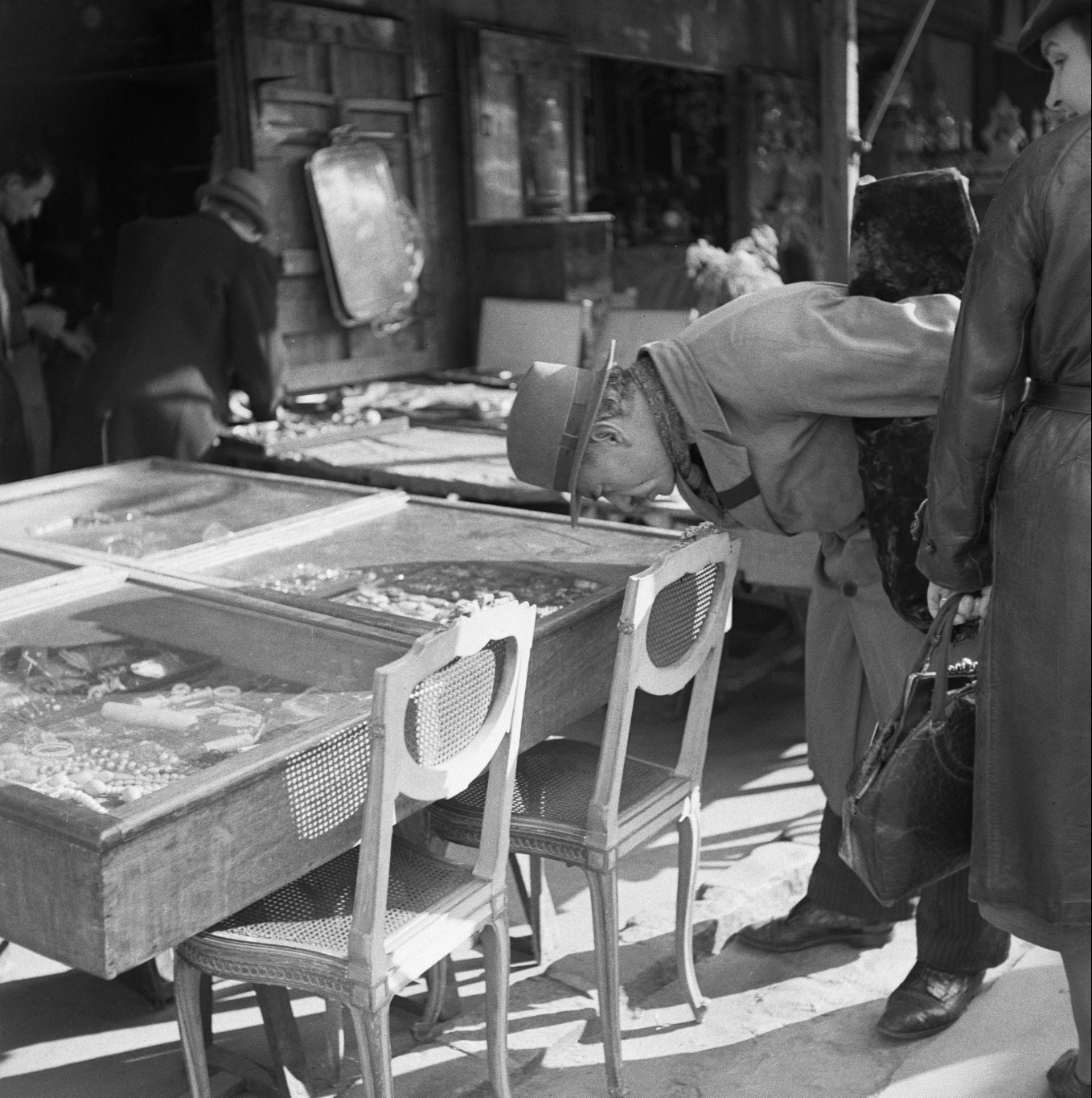 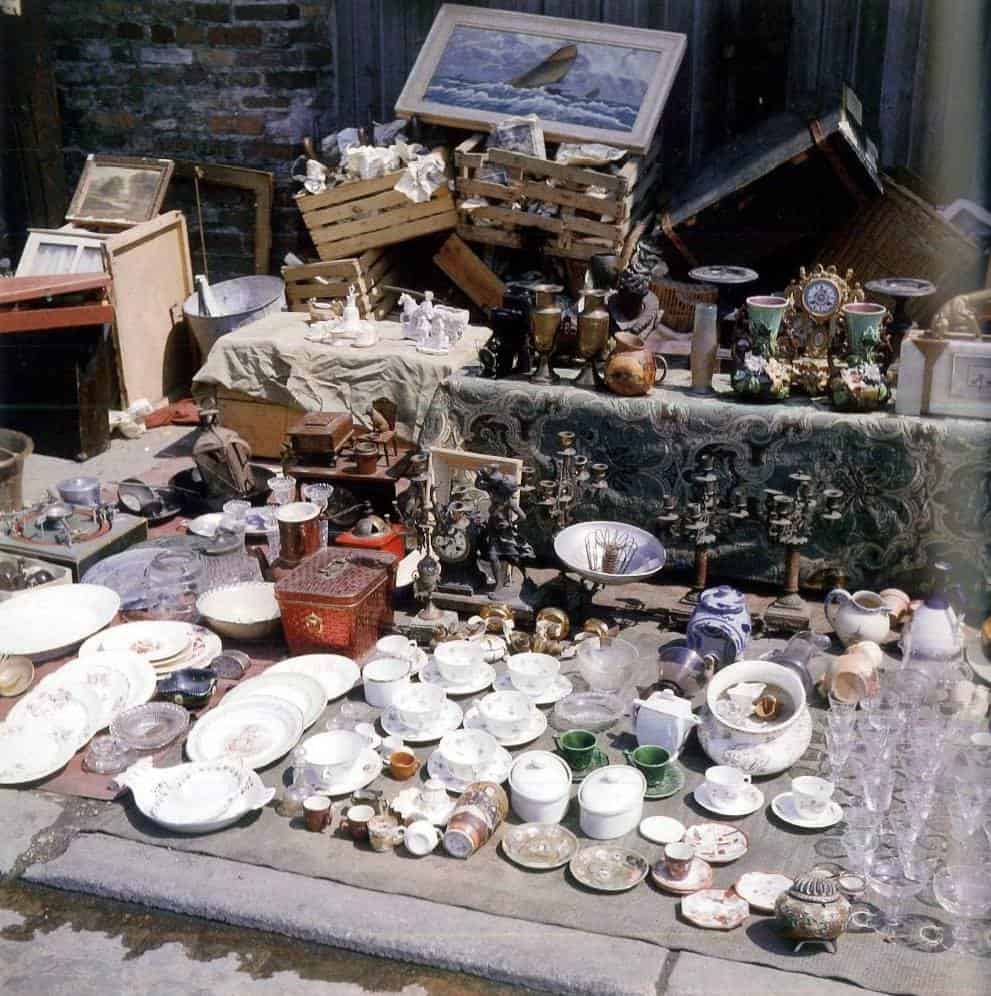 It is indeed a multitude of craftsmen: cabinetmakers, bronziers, marble workers, glassmakers, ceramic restorers, chandeliers, painting restorers etc. which ensure the maintenance and the safeguard of the artistic heritage of France, which consequently also makes it possible to preserve the know-how of all these professions. It is estimated that 3000 derived jobs depend on the site of the Puces (Craftsmen, multiple and varied suppliers, hotels, restaurants and bistros, etc.) A place of traditions, the Puces are home to the temple of gypsy jazz, the “Chope des Puces”, where the Chope des Puces officiated. celebrates Django Reinhardt and rock concerts at Picolo and Roi du Café. “Chez Louisette”, we can listen to the singing tour of the cheeky girls taking over Piaf for more than forty years! The Flea markets have always inspired great names in the arts and literature, such as André Breton, Jacques Prévert, Raymond Queneau, Robert Doisneau, Pablo Picasso, César, Willy Ronis, Woodie Allen and even Thomas Dutronc. The famous Goulue de Lautrec, who made the great days of the Moulin Rouge, lived at the Flea Market, as did Charles Aznavour whose parents had a shop.

Gastronomy also has its place at the Flea markets, where around forty establishments are there to welcome passing visitors.

The MAP (Marché Aux Puces), an association governed by the 1901 law, aims to bring together second-hand dealers, antique dealers, art galleries, market owners and craftsmen and it acts as a link with communities and partners. It is developing several actions to safeguard, develop and promote the Fleas.

Manage cookie consent
To provide the best experiences, we use technologies such as cookies to store and/or access device information. By consenting to these technologies, we will enable us to process data such as browsing behavior or unique IDs on this site. Failure to consent or withdrawing consent may have a negative effect on certain features and functions.
Manage options Manage the services Manage suppliers Find out more about these purposes
See preferences
{title} {title} {title}
Back to top